It is a known fact that the media is saddled with the primary responsibility of portraying issues that are peculiar to a particular set of people within a socio-political terrain. It is of essence to note that the authors of our 1999 constitution understood the necessity for community reporting by inserting a fundamental clause in section 22. This clause helps to buttress the fact that the media, as the fourth realm of the estate, is essentially charged with the mandate to discuss the challenges that plague the developmental pace of a nation, including the world.
This then subtly reinstates the core functions of the media – to educate, to inform and to entertain. In a bid to ensure the people and the government are abreast with certain pieces of information, the need for community reporting gets to be germane.
Research in the field of journalism reveals that the journalistic terminology “community reporting” should be a locally-oriented cum professional news coverage that deals with city neighborhoods, individual suburbs or small towns, rather than national or world news. This is as a result of the fact that community reporting basically concentrates on news-worthy stories that affect the locals and inhabitants of a particular place. Experts in the field of journalism, however, opine that if a community report tilts towards wider topics, it would most likely concentrate on the possible effect it would have on the local audience being targeted.
However, contextualizing community reporting in Nigeria, one cannot but notice the huge gap in that arm of journalism. In fact, one could opine that there are numerous unreported and underreported issues in various rural communities across Nigeria. This then gives us the temerity to question how much local reporting various media houses in Nigeria embark on. How much of their socio-economic and developmental challenges are being reported?
If our local reports had been able to put successive governments on their toes, no one would question the effectiveness and the quality of our work as journalists.
It is a statement of fact that community reporting may not constitute the juicy aspect of core journalism, especially in Nigeria where many media houses have failed to pay journalists in months. In fact, community reporting lacks the glitz and glamour a budding or seasoned journalist wishes to clinch.
But the media is the mouthpiece of the helpless. And the main goal of effective journalism is to spur national development through well-researched reports.
It is necessary that reporters, saddled with the responsibility to engage in community reporting, should view their beats as sacrosanct. This is owing to the fact that effective community reportage helps attract the attention of the government to the pending developmental issues that clog the developmental wheel of the country at large.
Experts estimate that eighty percent of our estimated population of 180 million live in these rural communities. This indicates that if basic developmental issues are dealt with by thorough community reporting, issues that deal with poverty, insecurity, disease outbreaks among others would be reduced to the barest minimum.

Rotimi Sankore in his presentation at the ‘Rotimi Sankore Masterclass’ of the Civic Media Lab explained the link between underdevelopment and the numerous challenges of the country.

Data drawn from the National Bureau of Statistics and from various ministries across Nigeria were shared. Take a look at this. END_OF_DOCUMENT_TOKEN_TO_BE_REPLACED

It’s the International day for the elimination of Violence Against Women; the day for us all to #OrangetheWorld.

From psychological to physical and then physiological trauma, many young women have experienced pain as a result of violence. Even as laws have been enacted to mitigate such dastardly acts against women, we still have case upon case resurfacing.

END_OF_DOCUMENT_TOKEN_TO_BE_REPLACED

November 19 every year is World Toilet Day. This is an official United Nation’s Observance which seeks to draw attention to the global need for hygiene, Sanitation and Safe Water.

Wondering what you should do as a journalist? Well here are some numbers to JumpStart your ideas.
According to the United Nations,

END_OF_DOCUMENT_TOKEN_TO_BE_REPLACED

Dear journalist, you know we are past the era of analogue journalism where every process of news reportage and production were done manually, right? It’s about time you got on your track and harnessed the technologies of the 21st century to 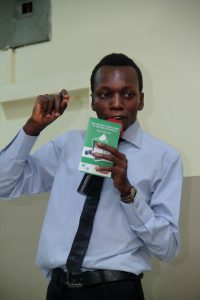 be outstanding on your beat

So, you have written a story that took sweat and blood from you. You have cut all your vox pop and edited your photos. This story means a lot to the community you are reporting on and you have been unbiased in your reportage. END_OF_DOCUMENT_TOKEN_TO_BE_REPLACED